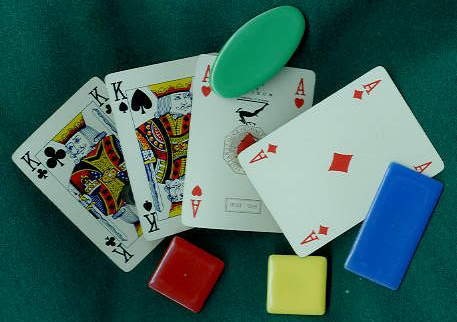 The picture figured above is a combination in the poker cards’ game, which is called in Italy "Titanic."
To say the truth, that combination does not have anything titanic and it is often used - in order to prevail - in the so called "bluff", which is passed as a higher level game.
We truly believe that this key does well represent some aspects of the competition in our Society, whose rules resemble every day more those of poker.
In order to be winning, preparation, determination, courage, self-confidence are required, but also the ability to "strike hard" the enemy, identifying its weaknesses, to mislead him in a better way.
One play by itself; there are not partners and the real goal is made up of all the things that the others possess.

Dear to the American model, the ‘’exasperated’’ typology of competitive Society is now increasingly under fire because of the social damages it would produce.
With the relevant treaty of the American sociologist Alfie Kohn, many of the Western culture stereotypes began to fall, according to which human competition would be central in the evolution of the specie and in civilisation.
Nowadays, scientific research on interlinked forms of life induce us to better understand and accept a new relation with ourselves and other forms of life, as it was perfectly natural.
In any case, the guarantee of survival of our species is linked to the human capacity to interact with the surrounding environment and the primary drives with 'intelligence.
The ball properly "ethics" is only human and tend to the preservation of quality is not immediately necessary for the species but the fruit of intelligence related to an ideal creative man.
Man sapiens less subject to the accidents of nature.
His challenge now is to Grant the survival even for the most vulnerable.